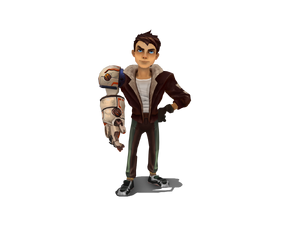 This article is a stub. You can help Goliath Wiki by expanding it.

Andrew Gromov is the player character in Goliath. He is a pilot who crash lands on a mysterious world with his co-pilot, Dave. He is a brilliant inventor who created a mechanical arm for himself after a terrible accident. He creates the Goliath robots to survive the strange world he finds himself on after the crash.